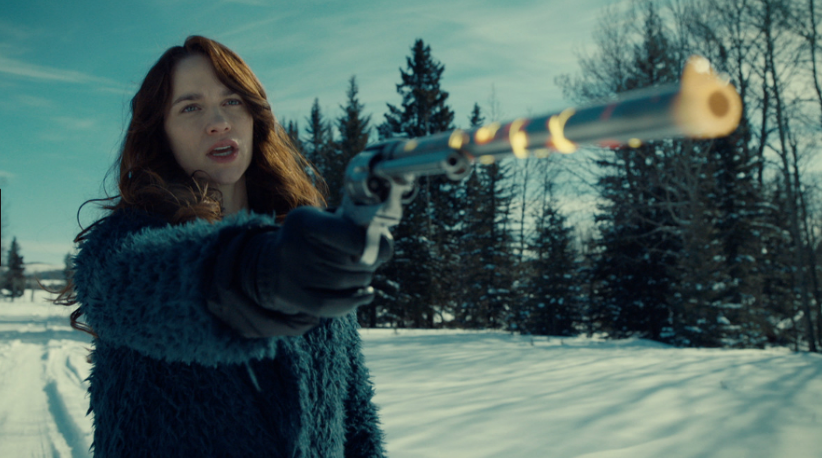 Wynonna Earp season 3 started filming earlier this week in its familiar environs of Calgary and southern Alberta, and actress Melanie Scrofano, who plays the titular character, is back in action as her character hunts down the demon who put the curse on her family. The show doesn’t return until the summer, but there are hints about what’s to come.

Showrunner Emily Andras spoke to the Calgary Herald about Wynonna’s new mission now that her pregnancy (and that of Scrofano) is no longer in the picture. “We have a lead character who is essentially a superhero who has had to give up her baby in order to protect her,” says Andras. “What that leads us back to is a more fierce and determined, even kamikaze-type Wynonna Earp. She is back in fighting form. She is drinking her whisky and firing her guns but now she has this thing haunting her.”

Wynonna Earp season 3 was announced back at San Diego Comic-Con 2017 to uproarious applause from fans in attendance at the show’s panel. Syfy and IDW Entertainment also shared an exclusive trailer for the remainder of the season, but the big news came from IDW Entertainment president, David Ozer. The panel’s cast members that got to share in the big news included Melanie Scrofano, Shamier Anderson, Tim Rozon, Dominique Provost-Chalkley, Katherine Barrell, Varun Saranga, Tamara Duarte, along with showrunner and creator Emily Andras and comic book creator Beau Smith.

Moderated by UPROXX’s Donna Dickens, the panel saw the Wynonna Earp cast reveal behind-the-scenes antics and more details about the biggest hidden secret of the season – writing in Scrofano’s real-life pregnancy, which made Wynonna Earp the first pregnant superhero.

“Fans have been passionately embracing Wynonna Earp since its debut,” says Ozer. “SYFY recognized that passion and when coupled with superior writing, acting, directing and production values, saw that Wynonna Earp was more than just a distinctly unique television series. We’re thrilled to continue our partnership with SYFY and look forward to another fun season of incredible entertainment with the cast and crew of Wynonna Earp.”

“We are so excited have this strong female-led, witty action series return for another season and deliver something special to our passionate fans around the world,” Andras adds.

Produced in Calgary by SEVEN24 Films and globally distributed by IDW Entertainment, Wynonna Earp follows legendary lawman Wyatt Earp’s descendant, Wynonna (Scrofano) who inherits his mystical gun, Peacemaker. With it, Wynonna and her posse of dysfunctional allies must fight against supernatural beings and other paranormal occurrences in a raucous, whisky-soaked struggle to break her family’s demonic curse. Andras (Lost Girl, Killjoys) developed the wildly imaginative series for television and serves as executive producer and showrunner. SEVEN24’s Jordy Randall and Tom Cox serve as executive producers along with IDW CEO & Publisher Ted Adams and David Ozer, as well as Todd Berger and Rick Jacobs.

Wynonna Earp season 3 is expected to air in the summer of 2018.

Read more on Den of Geek